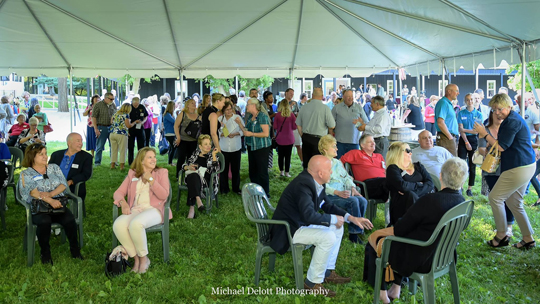 The Multi-State Mixer at Aldens Kennels June 6 was a great success with more than 300 in attendance.

Most mixers count the number of people who attend in the dozens – two or three dozen. The Multi-State Mixer at Aldens Kennels, however, included business owners and managers from nine different chambers of commerce and business networking organizations; they counted the attendees in the hundreds. This was the fourth year of the event. 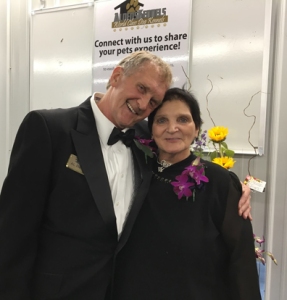 Janet and Al Domrase – hosts of the Multi-State Mixer at Aldens Kennels.

“We had (#?) people attend the mixer,” said Al Domrase, the owner of Aldens Kennels. “It’s a great way for people in the business community to connect with others in the community.”

The mixer started at 5 p.m. and lasted until shortly after 7 p.m. At 6 p.m., there was a demonstration, on dry land, by the National Champion Wonder Lake Ski Team. The speaking-engagement and radio team of 2 Bald Guys & A Microphone emceed the event (the 2 Bald Guys are Tim Stewart and Kent Jones). There was food, drinks and raffles – lots of raffles.

While an event of this magnitude required a lot of work by the folks at Aldens Kennels, as well as other volunteers, numerous companies and individuals also supported the event. Those who supported the mixer include:

“We really want to thank all those who supported the event,” said Domrase. “They made this all possible.”

Hi, I am the President of Alden's Kennels Inc. in Ringwood, McHenry County IL. I have been in the pet industry for over 25years. I am your pets vacation planner, why leave your pets at home when they can have the vacation they deserve, in McHenry County IL. We board and train and have field trips to the best pet places.
View all posts by aldenskennels →
This entry was posted in Pet Events, Small business Opportunity, Uncategorized and tagged business networking, Multi-State Mixer. Bookmark the permalink.